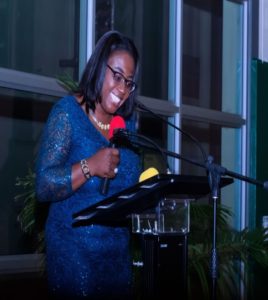 Distinguished Collaborators, and all supporters, On behalf of “Les Nord-Louisiens en Action, Inc,” and our partner Green Cross International Mobile Health and Continued Education, I welcome you to our Grand Opening Fundraising and Award Ceremony.  I am very excited to share our objective with you.  However, I would be thoughtless if I did not first take this moment to thank everyone present here tonight for your strong support.  A special thank you to Mayor Dr. Smith Joseph who embraced our objective the first day that we introduced it to him.

On April 30th, 2017, a group of fourteen Nord-Louisiens sat down together with the objective to organize a Community Fair in Haiti during the week of La Saint-Louis.  As we discussed, the team decided to open an organization which will continue to provide support to Saint-Louis du Nord.  As a group, we planned to organize a Health Fair, a Back-to-School Bash, Folkloric dance Competition, Computer and Language trainings.  We also discussed about opening a center to assist the youths.  As we moved along with several follow-up meetings, the group diminished.  A small portion of us never get discouraged, but continued to inform everyone that attended the initial meeting on April 30th, 2017 about every step that we are trying to make.

The committed team decided to embrace all the six Communal Sections with no political intention. We believe that there is no Saint-Louis du Nord without the Communal Sections.  Our objective is to form a board after our Grand Opening in Haiti and joining members to the organization must be from the different communal sections.  Serving les Nord-Louisiens play significant roles in advancing the legacy of this organization.  In preparation of our Grand Opening, we took time to brainstorm our ideas with some key leaders from Saint-Louis du Nord, people from the different communal sections, pastors and friends of Saint-Louis du Nord.

As we determined to make an even greater impact on our commitment, we call upon all Nord-Louisiens to become part of this organization.  Our goal is to start strong and become stronger in the future. We believe that we will not accomplish our goal without everyone’s support and most importantly all the existed organizations for Saint-Louis du Nord: ADPD, Pepsi, Saint-Louis Demain, Saint-Louis Ville and upcoming ones. We are grateful to our sincere partners, Dr. Joseph Smith, the Mayor of the Great City of North Miami, and Mrs. Aline Lafortune, Founder of Green Cross International Mobile Health and Continued Education.  There would not have been tonight without the support of the following committed members: Mrs. Emma Caris François, Mr. Bertin Semelfort, Mrs. Arlette Telfort, Mr.  Fedner Pierre-Louis, Mr. Renel Denis Bellevue and Mr. Rochener Cepoudy, Mrs. Bernadette Atis. My fellow Nord-Louisiens, all friends of Saint-Louis Du Nord, please remember that tonight’s Grand Opening is all about the difference each one of us can make in other’s lives, our gratitude for your support, and how together we are making dreams come true.  There is nothing more rewarding than helping someone who can’t pay you back, but instead is enable to forward their blessings on to others.  Thank you for your first step with us.  All blessings are yours!

Click to the right to view our photo gallery